Are Electric Fences Safe for Dogs? 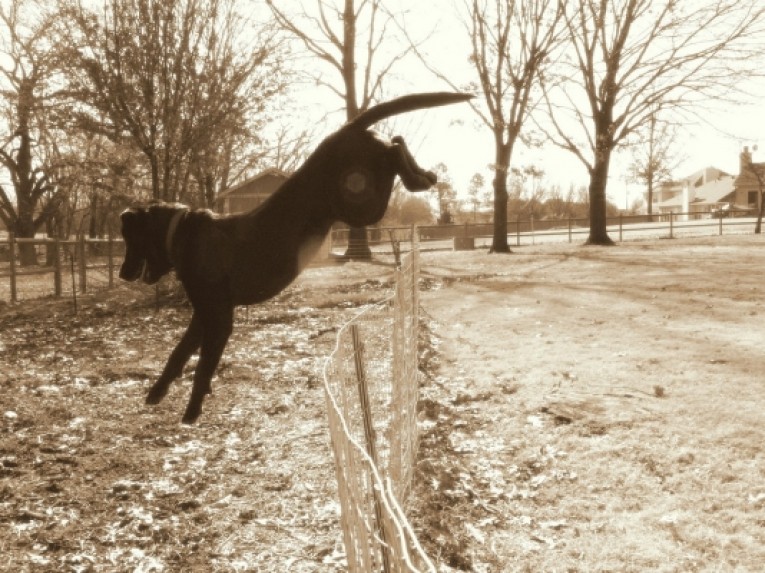 Are Electric Fences Safe for Dogs?

Many dog owners struggle to get their canines to toe the line and stay within the confines of their property. This is doubly hard in certain situations. The dog in question may have a hard time understanding the owner’s wishes, whether he’s new to the home, or has a personality that needs training in a specific way. Or, it may be the owner isn’t training him properly, or doesn’t quite know the right way to go about things in the circumstances.

Other times, the problem can be more complicated, like when it’s more societal where a neighbor refuses to allow a fence to be built, or altered to better suit your dog’s training or behavior. It might even be of a legal nature, as in certain communities legally prohibiting the building or erection of physical barriers such as fences on their lands.

In these circumstances, an owner may be hard pressed to come up with a solution. Your dog is, after all, part of your family, and while these rules and restrictions may curtail his freedom to an extent, and often displease him no extent, they’re necessary for both his own safety and security, as well as that of other people and animals in the community. If nothing else, you’re required to do it just to keep any legal trouble at bay, if, say, your dog is inclined to bite another person for whatever reason. Lawsuits can bleed you dry, as we all know.

The fact is, mere training and physical barriers to restrict your dog’s territory to roam freely are sometimes difficult to implement, or flat-out impossible. The advent of technology has, however – for better or worse – come up with an inventive solution even for such convoluted, or difficult situations, and that is the electric dog fence.

As long as these systems have been in use, this question has always played at the hearts and minds of owners and proponents of animal rights – are electric fences safe for dogs? In this article, we will talk about both the effectiveness of, as well as the issues surrounding the training of a dog with an invisible fence, particularly the questions of ethics and safety when you install an electric fence for dogs.

So are electric fences safe for dogs? Before we get to the answer, it would be good to understand, however briefly, how these systems work, and some of the varieties that are available in the market.

The electric dog fence, also known as a pet fence, a fenceless boundary, or more appropriately, as an electronic pet containment system, uses one of several different variations of a system that uses a light-weight electronic collar, worn by the dog, and which causes the collar to emit sonic beeps, electrical shocks or a combination of both if the dog approaches or crosses a specific perimeter or area, to deter the dog.

The electric shocks might be programmed to be delivered at an increasing frequency and/or strength, depending on the system, the size of the dog, or specifications from the owner. Over time, several variants, some now using complex and precise wireless GPS systems, have emerged, and the method has gained increasing traction over the past few decades.

A popular wire-based electric dog fence is the PetSafe Wireless Pet Containment System, which senses the proximity of the electronic collar to a wire buried beneath the ground that acts as the perimeter or boundary. This system includes functionality such as four levels of the electric correction, tone and vibration emitted by the collar, which can be adjusted by the owner, and also, an ‘anti-linger’ feature that prevents the dog from running down the collar’s battery.

Wireless electronic dog fences are quite popular, too, amongst which is the SportDOG 100-Acre In-Ground Pet Fence System, which can perform wireless monitoring of a circular area with a diameter of about 180 feet, within which your dog can roam and play freely.

The cost of a decent electronic dog fence is often significantly lower than the total cost of erecting a physical fence, which involves a lot of things when you get down to it – getting good quality material, the cost of labor, the upkeep, etc. They also take a lot less time to set-up. Also, as mentioned here earlier, in certain communities, setting up physical fences is illegal.

With an ‘invisible fence’, you can conveniently circumvent such hassles when you need a barrier to protect and secure your dog. Besides, the flexibility that an electric dog fence provides can be quite remarkable. With the clutter-free install of an electric fence for dogs, it allows you to shift boundaries quite easily, without the mess involved in modifying or moving an actual fence, and also, can be quite a blessing for owners who dislike physical fences on aesthetic grounds.

Keeping aside the convenience and cost-efficiency a fenceless boundary holds over regular fences, sometimes when you’re dealing with a dog that is hard to control without continuous personal supervision, is extremely energetic, or if you just live in a location or under circumstances in which it’s virtually impossible to physically restrain your dog from stepping out of bounds, an electric dog fence is just about the only way to go.

A physical fence is not foolproof. A dog large or determined enough can jump over it, or even tunnel under it to escape. At times, gates are left open due to carelessness, or the dog may be clever enough to figure out how to open them on their own. An electric dog fence, while not foolproof itself, can be a lot more dependable in such situations, while also allowing your dog to roam free without supervision within the set boundaries.

The Arguments Against Invisible Fences

While training a dog with an invisible fence may seem much more convenient than conventional means, there are valid questions regarding the safety and ethics of the method that owners should address and reflect upon before they choose it, lest they regret things down the road.

Firstly, one should understand that the electric dog fence is certainly not without some very basic flaws. It doesn’t always manage to stop a dog approaching or attempting to leave the fence. A sufficiently excited, or determined dog may well ignore the signaled corrections, and simply force his way through.

Often, in such cases, when the dog feels the shocks again, as he approaches the fence to come back in, he might be disinclined to reenter it. Why would he want to suffer through the unpleasantness repeatedly? Perhaps he isn’t in an excited enough state as he returns to make it back ‘unscathed’. Such escaped dogs often wander around further out, instead of coming back. This would never happen with a regular fence.

Training a dog in the invisible fence method can certainly be simple and straightforward, but, admittedly, all things being equal, and were it that either way were equally secure, the right method to employ in securing your dog is undoubtedly the use of physical barriers, over invisible ones. The very fact that electric shocks are used to warn, subdue and deter a dog – the source or reason behind which he might not even fully comprehend – is fundamentally disturbing, and implies an element of danger to the dog himself.

Setting aside the stories of actual physical harm caused to some dogs in the form burns and other injuries due to faulty equipment used or excessive ‘correction’ applied, the unnaturalness of the electric shock method can have more serious repercussions on the health of a dog that are not immediately apparent. The method also undoubtedly causes great stress to some dogs, and the consequences may manifest in psychological forms.

For instance, a dog might approach or cross the boundary while chasing after an animal, or a toy, or merely in the excitement of seeing another person. His intentions may not be hostile at all. But when he gets shocked on his approach, and doesn’t understand that what happened was due to his proximity to the boundary, he might associate it with the animal or toy or person he was focused upon.

Or, he may simply associate the feeling, and rightly so, to the boundary itself – his manner becoming jittery and aggressive whenever he’s near the invisible fence. This often leads to what is known as displaced aggression, when the dogs direct their anxiety, fear or anger at what they believe may be the cause or source of the shocks. Also, another cause for concern with this method, is the absence of protection and security for the dog himself.

Where a physical fence would protect the dog from other animals, unwanted visitors or any other thing, an invisible fence is incapable of such a function.

Another alternative to an electric dog fence is to get your dog an outdoor dog kennel. These are designed to give your dog a safe, contained, outdoor area for them to roam around in. These are ideal for people who do not have fenced in yards, but also don’t want to use an electric fence for their dog.

In the end, if applied incorrectly or without due consideration, training a dog with an invisible fence could just be a load of very simplistic, and unproductive, negative reinforcement. While the method has its uses in certain situations, it must be considered carefully and with due concern for the health and well-being for the dog himself.

Faulty equipment, inappropriately configured systems, and blatantly enforced corrections without proper, personal training could turn your dog’s life very unpleasant indeed. However, when carefully and considerately applied to correct and control the behavior of dogs when they need it, while being complemented with physical training, this can be a very useful, and beneficial method to turn to. Either way, as long as you have your dog’s best interests at heart, and make informed and deliberate choices, you’re alright.