Bringing a Dog Into a House of Cats 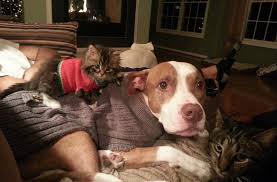 For most of my life I have preferred the soft cuddliness of a cat as the ultimate pet. I guess you could say I was a cat person. I believed they were the superior pet with their coolness and beauty. When they are kittens their swagger and playfulness is hard to resist. Chasing through the room at high speeds and pouncing on anything that moves can give lots of entertainment to the proud owner. When they are older they are the perfect cuddle partners, curling up on your lap with the motor running begging for your strokes. I have usually had two such lovelies gracing my home with their dignified beauty. Two warm bodies snuggled up with me on cold winter mornings.

One day I was asked if I would take in a dog that needed a home. He was a Chihuahua/Rat Terrier mix and only weighed in at five pounds. It seems this little guy was having a bit of trouble with the dog that lived across the street and his owners were worried that it would end in disaster. He was used to a country atmosphere with a large fenced in yard to roam around in and I wondered if he would be able to adjust to an apartment in the city. I agreed to welcome him in and see if he could make the change. He not only would have to adjust to different living conditions, but my home was occupied by two beautiful brother cats that had a hard time accepting anyone but each other. There had been cat-sitting episodes in the past that showed me the territorial nature of my boys.

When he arrived his entire body shook uncontrollably. I learned that it was the Chihuahua in him that was responsible for the trembling. Immediately my heart went out to this tiny dog holding one paw up in front of him unable to control his anxiety. He came with his basket and pillow, two toy ropes and buried under the pillow his cookies and vet records. I held him on my lap and stroked behind his ears and soon enough the trembling stopped and he seemed to feel comfortable.

His encounters with the cats were another story. Even though he was a miniature dog he was under the impression that it was his duty as dog to chase the cats. He ran up to them yipping furiously and when he discovered that they were not impressed and did not run away from him he managed to veer to the left before he actually had to make good on all his barking. Several episodes of this later and only a paw raised against him a couple of times by the boys and he realized that these cats were not quaking in fear at his five pounds of canine ferociousness. There is now a truce among them and they pretty much leave each other alone.

He adapted well to apartment living, perfectly potty trained and had no trouble letting me know when he needed to go out and take care of business. For my part, I had little trouble adjusting to the chores associated with doggy care. I am now usually armed with Baggies in my pocket for strolls around the neighborhood and watch with interest “The Dog Whisperer.”

I now understand the dog person a bit better than I did before. Never before have I been greeted with such excitement and enthusiasm when I come home from work. Dogs certainly know how to feed the human ego. He usually goes everywhere with us, riding in the car for a Sunday drive, heading out for a coffee on a Saturday afternoon or just out visiting. He’s always perfectly well behaved and no trouble to take along. I’ve even done something I never thought I would do. I bought him some sweatshirts. Yes I have become one of those people who dress up their dog. I have convinced myself it’s because of the lack of fur on his belly and his small size, but really he looks adorable in his Mickey Mouse hoodie.

I no longer consider myself a cat person, nor do I now consider myself a dog person. I just simply love my animals each individually for their unique qualities and the joy that each of them brings to my life. I can’t imagine my home without them.