How to Crate Train Your New Dog 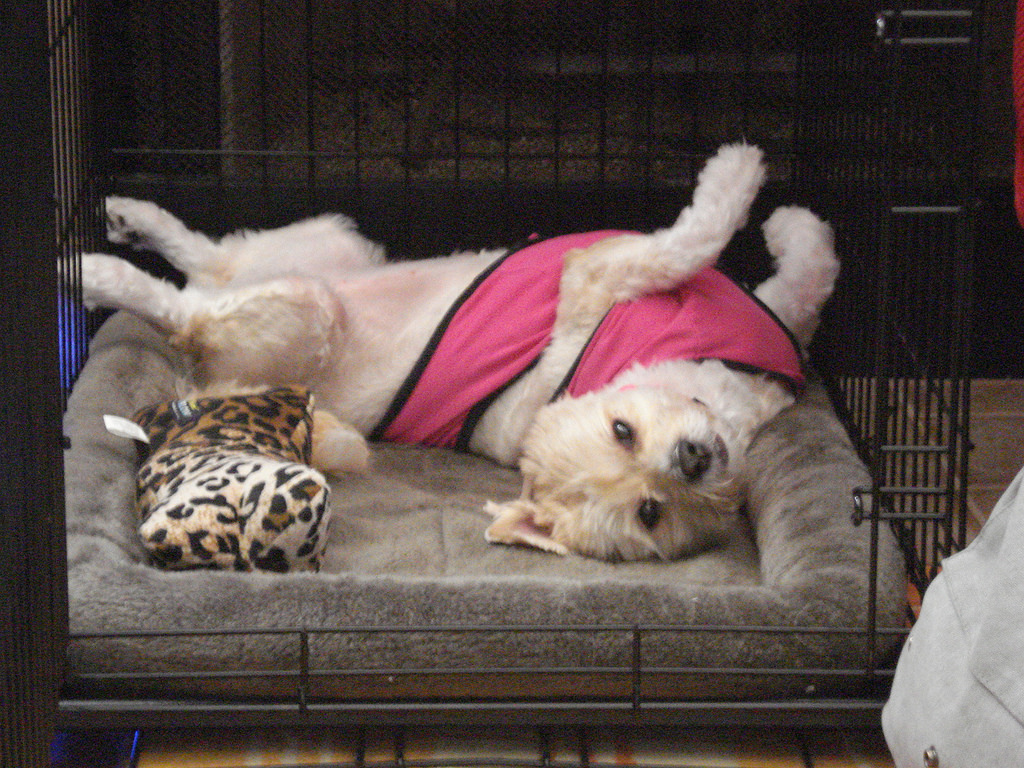 Crate training makes your life easier by reducing worries about the safety of your dog and your things while also providing a comfortable, structured environment that your dog knows he can count on. While some dogs immediately take to the crate, others are reluctant. To ensure that your dog ends up liking his crate, it’s important to approach crate training the right way.

The first thing to do is to select the right sized crate. A crate that is too big will give the dog, especially if he’s still a puppy, enough room to eliminate in one area and rest in another. A crate that is too small will be uncomfortable for the dog, making him dislike it no matter how hard you try to teach him to enjoy it. The crate should be large enough for him to stand up and turn around in it with relative ease. Many crates come with an adjustable divider, allowing you to change the size of the crate as your dog grows.

In addition to selecting a large enough crate, you should also place a comfortable mat or towel on the floor of the crate so that your dog can lie down and rest.

Next, the introduction. Set up the crate in an area where you spend a lot of time when home, such as the living room. While the crate will serve as a comfortable place away from excessive activity later on, to make it fun, it should start off as another place to rest while still being close to the family. Leave the crate door open and toss a few treats inside. Encourage your dog to enter the crate to get the treats. Leave the door open, allowing him to enter and leave when he wants.

After he’s been in and out of the crate a few times, start feeding him his meals in the crate. The easiest way to do this is to use a Kong toy. Fill it with his kibble and some peanut butter. Place the Kong inside the crate and encourage your dog to enter the crate to grab the toy. Feeding him treats and meals in the crate helps him adjust to it.

During this process your goals are to get your dog used to the crate and to get him to be a fan of it. After he’s gotten used to eating his meals in there, begin requesting that he follow obedience commands while in the crate. Have him sit or lie down in the crate, praise, wait a moment, and reward. By giving him a specific instruction you are telling him what you want him to do. Waiting a moment helps him get used to being in the crate while not being focused on it. The treat is there to make sure he’s having a good time.

Begin closing the crate door while your dog is in the crate. This can be done during meals or after giving an obedience command. Stay right by the crate and only keep the door closed for a moment. Offer him treats while he’s inside the crate.

Gradually increase the amount of time that he is in the crate with the door shut. Stay nearby so he remains comfortable. Begin with 5 minute sessions, then increase to 10, 20, and 30 minutes. You’ll know he’s adjusting when he starts dozing off in the crate.

Once he has grown accustomed to relaxing in the crate, start leaving the room when he’s in there. Slowly condition him to being in the crate when you are not around. Be low key when leaving the room so that he doesn’t get the sense that it’s a big deal. Do this in short sessions, beginning with 5 minutes and then increasing to 10, 20, and 30 minute sessions.

Brace yourself for protests and whining. Many dogs will try that trick to get themselves out. Ignore the whining, waiting to see if he will give up his complaint. If he continues to whine for more than 10 minutes, go back into the room and go up to the crate. Give him a few obedience commands to follow, such as sit and lie down, and then release him after he has followed these orders. You will use the obedience commands to try to show him that following the instruction was the reason why he was let out (and that you were ready to release him), not the whining. Then go back to training while remaining in the room. Continue to provide rewards for being in the crate. Some dogs take longer than others to adjust.

These basic steps, though a little time consuming, will help your dog form a positive association with his crate and help you find peace of mind with keeping him in a crate. With a little patience and a lot of rewards your dog will learn to enjoy his time in his crate.