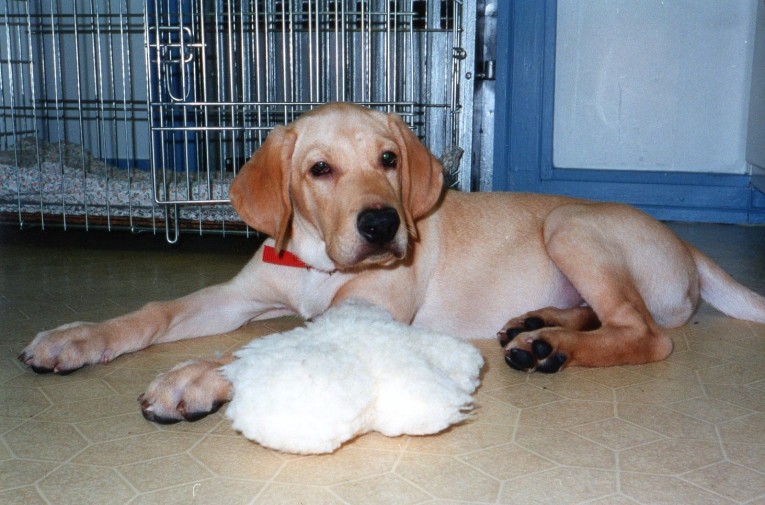 Why Crate Train your Labrador?

Labradors are one of the most popular breeds in the United States. They are smart, affectionate, loyal, loving, highly intelligent, good-natured, patient, and eager to please dogs that take well to dog training. Crate training a Labrador puppy is very important for the owner as well as the dog. Crate training is a term used to explain the process of adaptation that the lab puppy goes through in learning to joyously accept the crate as his own private den.

When the Labrador puppy is crate trained successfully, it is safely out of harm’s way when the owner is not available. The crate provides a safe, den-like refuge for the Labrador puppy while avoiding any unwanted behavior while left unattended.

The crate size chosen should have enough space for the Labrador puppy to stand, sit, lie down completely stretched out and turn around. Also, the crate shouldn’t be too large, as it could hinder the feeling of security and the puppy may habit one end of the crate for potty.

Thus, the size of the crate should depend on the Labrador puppy’s size and age, and then as the puppy grew up, bigger sized crates should be bought. However, when a large crate is used, then a section of the crate can be blocked using a divider (comes along with certain types of crates) to keep the pup off from spoiling the other end of the crate.

Click here to read our reviews of the best dog crates!

To keep the pup warm and comfortable, it is important to place a soft yet durable blanket or cushion in the crate. The bedding should be placed throughout the crate. This will encourage bowel control and prevent the puppy from spoiling the sleep area.

Click here to read our reviews of the best dog beds!

Getting the Labrador pup used to his crate

Treats and chew toys are put inside crate and the crate door is closed. This enables the puppy to see and smell the toys and treats but will not be able to get in to it. Open the crate’s door, and allow the pup to enter in to it and exit at its own will, but do not keep the door shut.

Each time the pup approaches or goes in to the crate, it should be appreciated or praised for doing so.

Once the puppy gets comfortable with the crate, then the next step is to close the crate’s door momentarily and then open it again. The crates door should be shut only long enough for the Labrador puppy to complete his treat and notice that the door is closed.

Before the pup gets upset or starts crying, the door should be opened and let it out. This step should be repeated a number of times during the course of the next day or two. Then, gradually increase the duration the door is shut while the pup is inside the crate.

Longer periods in the crate

Once the pup becomes relaxed and comfortable, then it should be left in the room alone for a short interval of time, which should be increased slowly up to a maximum of about an hour in a day.

The door should never be opened, even if the pup fusses as it will encourage bad learned behavior. However, the very important thing to notice here is to open the crate door only when the pup maintains silence for several seconds.

While training the pub to be in the crate for longer periods of time, it is important to ensure that it has had a wee recently.

Try keeping in a different room

The next task is to keep the crate in different rooms where one or more people are present, so that the pup will not feel isolated. This enables that the pup does not see the crate as a place of strict isolation, but view it as a safe zone, a resting place, and a feeding area.

At night, the crate should be moved to the bed room so that the puppy understands it as bed time and also helps you to hear if it wants to go out during night. Try to schedule in such a way that the puppy is taken out three times during the night.

Once the pup learns bedtime routine, the crate can be left in a regular location instead of moving it to the bedroom every night.

Once the Labrador puppy is crate trained properly, they will move to their place whenever it feels threatened or overwhelmed. So, at this stage, the crate door should be kept open almost all the time for the pup to come and go as they see fit.

Crate training a Labrador puppy when it is small is easier, because a new pup adapts much quicker than a fully grown Labrador. Most Labradors love their crates that provides them a safe space that is theirs alone.

Though, crate training a Labrador puppy takes some time and patience, it is beneficial to both owner and the puppy. It benefits the puppy by providing a secured and safe space for them, and helps the owner that that puppy never gets too loud, anxious, or destructive whenever he/she leaves the house.

Now that you have read our guide on crate Training a Labrador successfully….