Finding Ways to Exercise Your Dog 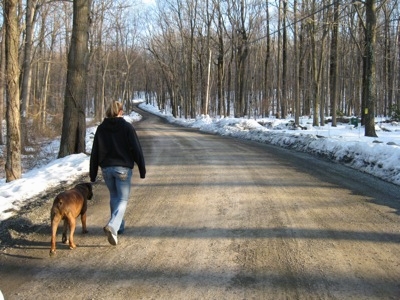 I obtained Buddy through a local animal rescue shelter; and he was between 1 and 1.5 years of age when I became his owner. In dog years, he was a child; and in human years, I wasn’t. He was always ready to play; and guess what, I wasn’t.

I did know that a dog his size needed a considerable amount of exercise, though. Therefore, I immediately began looking for ways to give him the exercise needed that minimized the amount of effort I had to put into it.

From the beginning, I found out that Buddy preferred an exercise partner when he exercised-me or another dog. Since he was the only dog I had, he considered me his exercise partner.

I had a moderately large back yard; but he would rarely run unless a squirrel happened to venture away from a tree. If I sat on the patio, he would just sit by me. Therefore, I purchased some battery-powered toys like a ball that would roll when turned on.

He would quickly lose interest and just watch it as it twisted and turned this way and that way. Unfortunately, that wasn’t the only exercise toy mistake I made.

Our first exercise partnering method was long walks. Unfortunately, the animal shelter let Buddy pull and lunge during walks. It had become a habit with him. After a few walks, I noticed that my arm was getting sore from attempting to hold him back.

This is when I tried the Gentle Leader® type of dog training head collar for walks. Afterwards, my walks with Buddy became much more comfortable for me while I attempted to train him to heel with a normal collar during our walks.

I tried throwing a tennis ball with the word “fetch” spoken sharply with each throw; but Buddy preferred to have me chase him to get the ball back. He really enjoyed teasing me by dropping the ball and then grabbing it and running off again just before I could pick it up.

He quickly learned that if he didn’t let me have the ball with in a minute or two, though, I would just quit the game. Therefore, he would let me pick it up after a minute or two. After I threw the ball again, he would begin the same “chase me” game.

One day I found a few hard rubber rings used for playing a yard game. I found an old broom handle and some moderately strong cord. Putting the three together resulted in one of Buddy’s favorite games.

The broom handle let me stand in the center and swing the ring in a circle just fast enough that Buddy had difficulty catching it until I slowed it down. Therefore, I could get him to run around in circles while I took it easy in the center.

Buddy’s favorite part came when he caught the ring because we would then play tug-of-war with both of us pulling on our side of the ring. This satisfied his chewing instinct to a degree and really satisfied his exercising with a partner.

Naturally, he would attempt to take shortcuts to catch the ring; but if I wanted him to run longer first, I could easily keep the ring out of his reach.

There are lots of dog exercise toys in the store; and they aren’t inexpensive. I found being creative, as I was with the broom handle, cord, and ring exercising device, to be the better solution.

Eventually, I found out about the WalkyDog® Bike Leash. On days fit for riding a bicycle, this allowed me to exercise Buddy a lot in less time. When we first start the ride, he would start his pulling habit; but I would eventually reach a speed that matched his.

This would have worked great except for those times it was necessary to go uphill. Therefore, I would usually plan the route to have him panting by the time we reached a hill. Unfortunately, I was usually panting also.

I had watched the Dog Whisperer on the Discovery Channel a considerable number of times before I obtained Buddy. This fact resulted in my biggest single expense in finding a way to exercise Buddy-a treadmill. It was easy to teach him to exercise on a treadmill once he learned that a treat would follow.

After about 5 to 6 minutes on the treadmill, though, he would begin giving me that look that said, “Haven’t I done enough to get my treat yet?” It turned out the treadmill was my favorite since I could watch as he ran, but it was not his. It was nice to have during cold or rainy weather, though.

I always imagined getting a pair of large wheeled skates and let the dog pull me. That would give him the opportunity to get all the exercise he wanted while I did as little as possible.

Unfortunately, when wet leaves were covering my backyard in the fall, Buddy appeared seriously allergic to them. He would not willingly set foot on them. The animal shelter suggested I return him since I could not afford allergy treatments. I do believe the skating method of exercise would have been an excellent method, though.