How to Stop a Puppy from Whining in the Crate 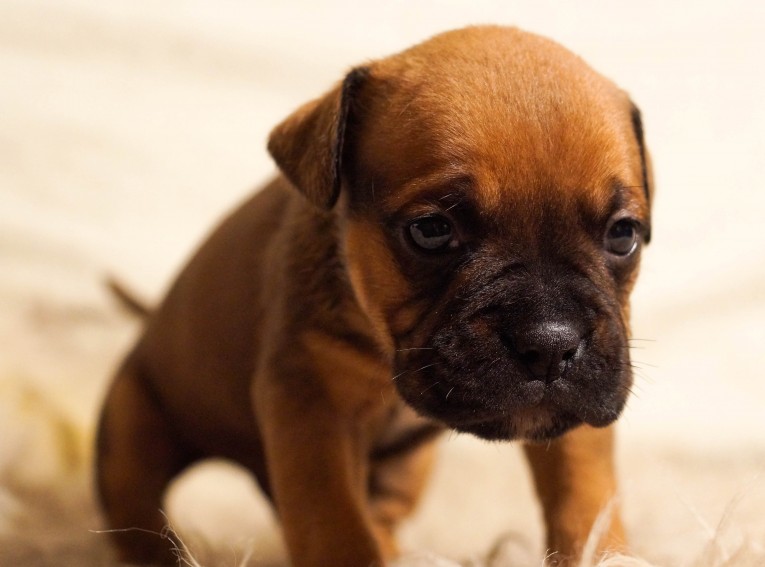 Dealing with a Puppy Whining in the Crate at Night

A puppy whining in the crate at night is one of the first – and more frustrating – problems dog-owners tend to face, one that might rob you and others at the home of precious moments of sleep, fray nerves, and if dealt with inappropriately, possibly even strain your relationship with your pup. It’s important, therefore, to encourage your puppy to feel comfortable and secure within his crate as early as possible.

A dog whining in the crate could probably mean he’s feeling considerable stress or discomfort. This could be due to a variety of understandable reasons. Perhaps the size of the crate isn’t quite right, or if he’s new to your place, just feeling the normal stress of being introduced to an unfamiliar home. Or, quite simply, your pup just wants to relieve himself. Of course, he’s making a fuss! Wouldn’t anyone?

Read on to try and understand the reasons for the problem, and for tips on how to stop a puppy from whining in the crate at night, or any other time, for that matter.

Make Sure the Basics are Covered

The easiest way to make sure you’ve ticked all of the bare necessities when it comes to the habitability of the crate, is to simply look at things from your pup’s point of view. What would you want your “safe-place” to be like? Here are some of the more pertinent things to take care of:

The size of the crate – make sure the crate is large enough for your puppy to comfortably stretch, turn and change positions as she sleeps, or generally rests inside. On the other hand, you might not want it too big so as to lead her to believe there’s room to relieve herself in a “distant corner”. Crates made by Midwest make for some very safe choices, a notably flexible one being the Life Stages Folding Metal Dog Crate, allowing you to adjust the size of the crate as your puppy grows bigger.

Safety – the more popular wire-spun crates are sometimes unsuitable for dogs who are particularly energetic, playful, or a little temperamental. They may choose to gnaw at the material and damage the crate, or worse, hurt themselves in the process. Keep an eye out for sharp edges, and whether there’s enough ventilation. Most dogs love partially enclosed spaces, which give them a sense of security, but some of the enclosed variety of crates may have holes or gaps too small to be entirely comfortable or even safe for your puppy.

Comfort and warmth – it doesn’t occur to a lot of people that the crate is supposed to be a place your puppy wants to keep turning to whenever she wishes to rest or just get some alone time. Like a home within a home. If it’s merely a box where you lock her up every night or when you’re away, she’ll think of it more as a prison than anything else. A good insurance against your puppy whining in the crate at night is to make the crate comfortable with padding, such as a dog fleece blanket or a rug that keeps the inside of the crate cozy, and more appealing to your puppy as a place to retire to. An excellent option is the K&H Manufacturing Crate Pad, which retains the puppy’s body heat and keeps warmer than a regular rug or blanket, making it ideal for winters, or if you live in a generally cold region. Please note that using newspapers often doesn’t work, because firstly, they aren’t as effective, and secondly, dogs tend to relieve themselves on them rather than use them as bedding.

Have a look at some of the best dog beds for other great options for your puppy’s bedding within the crate.

Location – where you place the crate makes an enormous difference, too. Your puppy always seeks some company, and especially when she’s getting used to a new home. Having the crate in a corner of the living room is usually a good spot, where your puppy can sense the presence of people at any time of day. However, you also want the puppy to be nearby at night, so you can hear her through your sleep if she needs you, making your own bedroom the ideal place to crate your dog in.

Nowadays one can be quite spoiled for choice, having a wide variety from among the best dog crates available. Taking your time to pick out the best possible fit could go a long way toward avoiding future problems with your dog whining in the crate.

Your Puppy Should Be Used to the Crate

Once you’ve taken care of the basics of the crate itself, the answer to the question of how to stop the puppy from whining in the cage lies primarily in getting him to feel comfortable and secure inside it. The best way to go about this is to feed your puppy inside the crate or give him special treats that he should understand he will get only when he is in the crate. If your puppy is initially afraid, or wary of the crate, and refuses to enter or even approach it, start with feeding him near the crate instead of inside it, so he eventually begins to associate the crate’s presence with welcoming thoughts of food. Once he gets used to its presence, you can make progress by slowly moving the bowl to the entrance, and increasingly deeper inside the crate. There are some really good choices of feeding bowls specially designed for dog crates. A notable one is MidWest's Snap'y Fit Water and Feed Bowl, which attaches well to the inside of the crate.

Remember – never force your puppy inside the crate, and be patient. Hunger will eventually persuade him to overcome any jitters he may have. Forcing a dog inside, or using the crate predominantly as a means to seclude him as a form of punishment will never do any good, as your dog will come to associate only negativity with the crate. Make sure you praise him plenty for good behavior while he’s inside. Using his favorite toys, such as a Nylabone Dura Chew, or special treats exclusively for good behavior in the crate are excellent methods to make good progress.

It’s crucial to remember that each dog has a different personality and that there aren’t really any “standard techniques” that fit all dogs. Ultimately, your progress primarily depends on how much you understand your dog, your patience, and that you give him plenty of affection and care whilst you train him. Follow more of our useful crate training tips to make steady progress with your puppy’s acclimatization with his crate, and train him not to grow up to be a dog whining in the crate later.

Dealing with Persistent Whining or Barking in the Crate

Sometimes, even when you’ve exhausted all of the above steps and techniques, your puppy might resort to whining or even barking at night, spontaneously or for no apparent reason. This might seem like an impossible situation at times, and leave you at a loss as to how to stop the puppy from whining in the crate at night, but again, it’s really important that you be patient, and try and understand if there’s anything specific troubling or stressing out your pup. With persistent whining, it’s important to suppress any urge to fuss over or soothe your dog by, say, feeding her, playing with her, or letting her up on your bed. This is especially true if your dog is acting out despite having a schedule. With a fixed schedule and a comfortable crate, ideally, your dog is happy and has no particular reason to act out, and coddling her in excess would only reinforce such behavior. On the other hand, it’s crucial to keep calm and not be overcome by frustration or anger to lash out at your dog, as this would only make matters worse.

Instead, observe your dog closely and try a process of elimination to arrive at the reason for the behavior. Did you have her relieve herself before she turned in? Did she walk or play enough to spend excess energy during the day? Did she eat normally through the day, and as per her schedule? Is there something wrong with the environment, say, an unfamiliar noise outside? Calmly eliminating possibilities in this manner will help you quickly understand the problem, and deal with it.

If your dog is acting out abnormally, and spontaneously despite being otherwise well-behaved and keeping to her regimen, perhaps she just needs to relieve herself again, for some reason. It might be she’s unwell, or merely needs an irregular potty-break because of something she ate. Using a phrase she normally associates with a walk to relieve herself and checking for a response is the best way to understand this.

If you cannot understand why your dog is whining, and if she appears otherwise healthy and well, perhaps she is merely seeking your attention, and the best way to respond here is to ignore her and bear it until she quietens down. Responding here, either angrily or to placate, will merely encourage her and the problem will continue to persist. If, however, the whining persists unreasonably or gets louder, you might need to employ corrective methods. These can range from the encouraging kind (using the quiet command, and rewarding obedience) to the tough-love kind (shaking the crate or jerking the leash, used with the quiet command). These methods should stop, or at least reduce the volume of the whining, which you can choose to ignore until it stops.

Dealing with a dog whining in the crate can be stressful for anyone. However, it’s not an impossible situation, and when it all comes down to it, all you need is a little patience, a welcoming crate for the dog, some handy tips for training and dealing with different situations, and, crucially, bottomless affection for your dog.