The Itching, Scratching and Licking Dog – What Are Options for Relief from Itching for Your Dog? 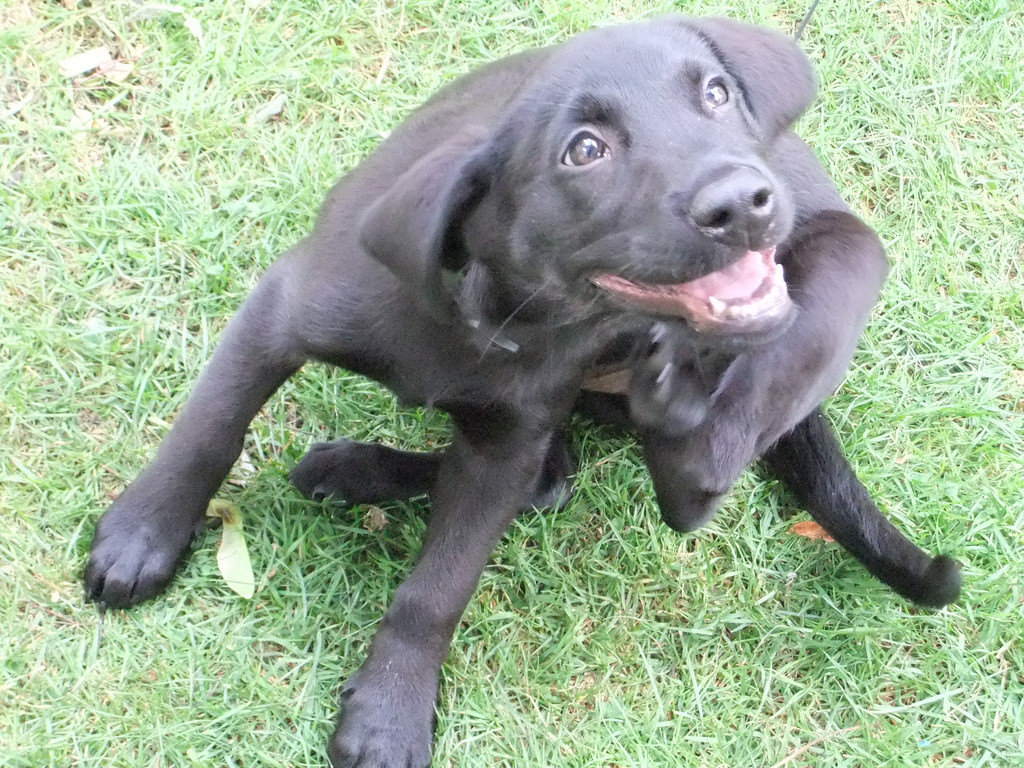 Let sleeping dogs lie, right? Sounds like an adage for a peaceful home, but what if your dog won’t ever lie still because she’s “ansty” with itches? Not only is the dog going crazy trying to relieve itching that just won’t stop, but the dog’s owner is driven to distraction with all the incessant scratching and licking. Constant scratching and licking can lead to serious skin problems for the dog and even staph infections if these behaviors are allowed to continue unchecked. But what is a frustrated dog owner to do for his poor itching canine companion?

Our dog, Daisy, has always had some trouble with itching and scratching. For a long time there was no visible evidence of any sort of skin condition or infection. Then she began to develop severe itching and was scratching at strange red spots on her belly. Her scratching and licking became frantic and constant and was causing her to lose the hair on her belly and under her front legs (her “armpits”, I guess you could say). The skin was even beginning to take on an odd leathery-looking appearance. We took her to the veterinarian, who diagnosed a staph infection as well as dermatitis and prescribed antibiotics. The antibiotics eliminated the staph infection, but how could we stop the itching? We desperately needed to find some way to prevent the dog from scratching and licking herself into another infection. What were the options?

Prednisone was prescribed initially with the antibiotic for Daisy to dramatically reduce the severe itching she was experiencing. The prednisone lessened the itching considerably, but it turned our sweet, lovable spaniel into a starving, ravening, slobbering food fiend! She was going through several bowls of dry dog food a day and was still acting like she was starving to death, even though eating so much was causing her to visibly and rapidly gain weight. In addition, prednisone is only for short term use since over the long term it may cause health problems, and when stopping steroid therapy, the dog must be weaned off slowly instead of stopping cold turkey. Even if our dog hadn’t had her ravenous hunger reaction to prednisone, we would have worried about possible health consequences of using it. Prednisone was not a good solution.

Our veterinarian told us Benadryl would be safe for our dog in the proper dosage, so we gave it a try. While she enjoyed getting the medicine (because we wrapped it in cheese!), it didn’t really seem to help the itching much, so it was back to square one. Next in the line of antihistamine choices was hydroxyzine. This worked better than the Benadryl, at least for a while. However, after several weeks of use, Daisy apparently developed a tolerance to it, and the relentless itching came back. So we were back to long nights of listening to *licklicklick* and *scratchscratchscratch*.

As another course of anti-itching therapy, the veterinarian suggested Malaseb shampoo and Malaseb spray. He said that these treatments are designed to fight itching caused by dermatitis that is associated with bacteria or fungi. As with the antihistamines, these may have worked to curtail the itching to small degree, but not enough.

There are a number of dietary supplements on the market, but our veterinarian finally recommended an over-the-counter supplement called 3V Caps Skin Formula. He said that in his experience these capsules were known to dramatically help itching and certain skin problems in dogs. 3V Caps contain fish oil, which is a source of Omega-3 Fatty Acids as well as Vitamins A, D, and E which are supposed to help maintain healthy skin and coat in dogs. All I have to do to get my dog to take a 3V Cap is to puncture one end with a tack, squeeze a tiny amount of the oil to the surface and offer it to her. She slurps 3V Caps right up, tail wagging! We truly had doubts 3V Caps would do much in the way of itch relief, but we had nothing to lose by trying it, and the dog thought they made an awesome treat. After the dog had taken 3V Caps for a couple of weeks, we suddenly noticed that she wasn’t scratching much anymore! Not only that, but all of the areas on her belly and under her front legs was peeling away, revealing healthy new skin underneath. Before we knew it, all the old leathery skin had sloughed off, and the soft, pink, new skin was growing new hair, which was a huge improvement in her appearance.

3V Caps are liquid gold! These little miracles are incredible, and my dog doesn’t need corticosteroids, sprays, antihistamines or anything else in order to finally be a real couch potato. (We do use the Malaseb shampoo once a week, but just because we feel it might be better than ordinary shampoos.) Don’t get me wrong, our dog still has occasional itching, but it’s no more than you would expect from any canine. No more antsy dog…in fact, she’s become a real couch potato, and at my house we can finally say, “Shhh! Let sleeping dogs lie!”