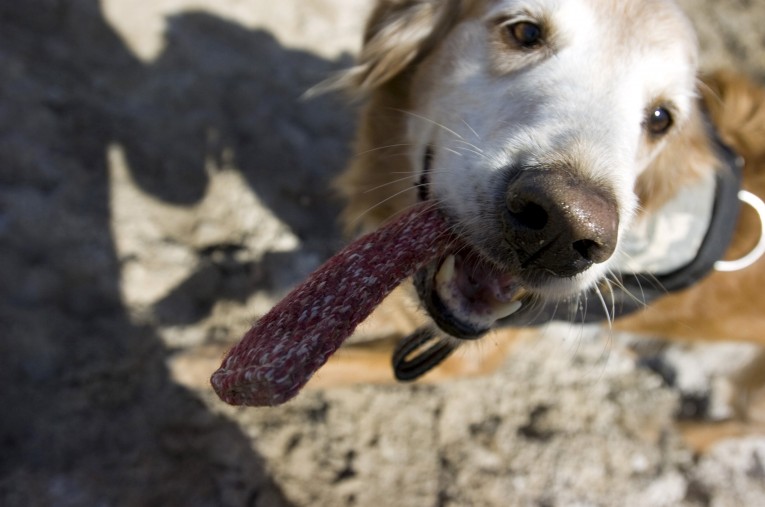 What is Mirror Method Dog Training?

It’s widely accepted among the vast majority of dog training experts that the most effective and humane way to train your dog is through a process called positive reinforcement training. This is a fancy phrase for what’s essentially a very simple theory: using positive reinforcement entails rewarding the behavior that you wish to see repeated, and ignoring the behavior that you don’t.

The Mirror Method is in direct contrast to some of the now-outdated but once-popular techniques for dog training, some of which were frankly abhorrent: physical pain and intimidation (such as hanging an aggressive dog up by her collar), or inhumane methods of aversion therapy (such as shock collars for barking).

Positive reinforcement works with your dog. Her natural instinct is to please you – the theory of positive reinforcement recognizes that lessons are more meaningful for dogs, and tend to “stick” more, when a dog is able to figure out what you’re asking under her own steam (as opposed to, say, learning “down” by being forced repeatedly into a prone position, while the word “down” is repeated at intervals).

When you use positive reinforcement training, you’re allowing her the time and the opportunity to use her own brain. Some ways for you to facilitate the training process: – Use meaningful rewards. Dogs get bored pretty quickly with a routine pat on the head and a “good girl” (and, in fact, most dogs don’t even like being patted on the head – watch their expressions and notice how most will balk or shy away when a hand descends towards their head). To keep the quality of your dog’s learning at a high standard, use tempting incentives for good behavior.

Food treats and physical affection are what dog trainers refer to as “primary incentives” – in other words, they’re both significant rewards that most dogs respond powerfully and reliably to. – Use the right timing. When your dog obeys a command, you must mark the behavior that you’re going to reward so that, when she gets that treat in her mouth, she understands exactly what behavior it was that earned her the reward. Some people use a clicker for this: a small metal sound-making device, which emits a distinct “click” when pressed. The clicker is clicked at the exact moment that a dog performs the desired behavior (so, if asking a dog to sit, you’d click the clicker just as the dog’s bottom hits the ground).

You can also use your voice to mark desired behavior: just saying “Yes!” in a happy, excited tone of voice will work perfectly. Make sure that you give her the treat after the marker – and remember to use the marker consistently. If you only say “Yes!” or use the clicker sometimes, it won’t have any significance to your dog when you do do it; she needs the opportunity to learn what that marker means (i.e., that she’s done something right whenever she hears the marker, and a treat will be forthcoming very shortly). So be consistent with your marker. – Be consistent with your training commands, too.

When you’re teaching a dog a command, you must decide ahead of time on the verbal cue you’re going to be giving her, and then stick to it. So, when training your dog to not jump up on you, you wouldn’t ask her to “get off”, “get down”, and “stop jumping”, because that would just confuse her; you’d pick one phrase, such as “No jump”, and stick with it. Even the smartest dogs don’t understand English – they need to learn, through consistent repetition, the actions associated with a particular phrase. Her rate of obedience will be much better if you choose one particular phrase and use it every time you wish her to enact a certain behavior for you.

How to reward your dog meaningfully

All dogs have their favorite treats and preferred demonstrations of physical affection. Some dogs will do backflips for a dried liver snippet; other dogs just aren’t ‘chow hounds’ (big eaters) and prefer to be rewarded through a game with a cherished toy, or through some physical affection from you. You’ll probably already have a fair idea of how much she enjoys being touched and played with – each dog has a distinct level of energy and demonstrativeness, just like humans do. The best ways to stroke your dog: most dogs really like having the base of the tail (the lowest part of their back, just before the tail starts) scratched gently; having their chests rubbed or scratched (right between the forelegs) is usually a winner, too.

You can also target the ears: gently rub the ear flap between your thumb and finger, or scratch gently at the base. As far as food is concerned, it’s not hard to figure out what your dog likes: just experiment with different food treats until you find one that she really goes nuts for. When it comes to food, trainers have noted an interesting thing: dogs actually respond most reliably to training commands when they receive treats sporadically, instead of predictably. Intermittent treating seems to keep dogs on their toes, and more interested in what might be on offer – it prevents them from growing tired of the food rewards, and from making a conscious decision to forego a treat.

How to correct your dog meaningfully

The great thing about positive reinforcement training is that it doesn’t require you to do anything that might go against the grain. You won’t be called upon to put any complex, weighty correctional theories into practice, or be required to undertake any harsh punitive measures. When it comes to positive reinforcement training, all you have to do is ignore the behavior that you don’t wish to see repeated. Not getting any attention (because you’re deliberately ignoring her) is enough to make just about any dog pretty miserable, and thus is a powerful correctional tool.

Remember, negative reinforcement can really have setbacks when you’re trying to crate train your dog or get them used to their playpen.

The bigger the fuss you make over her when she does get it right, the clearer the connection will be between a particular behavior(s) eliciting no response at all, but other behaviors (the right response) eliciting massive amounts of positive attention from you.

Hopefully this article has given you a good basic insight into the more helpful attitudes and techniques to use when training your dog with the Mirror Method.

However, the subject remains pretty complex, and it’s a good idea to learn as much about effective training techniques as possible. One excellent resource for dog training is the Puppy Development Guide – Puppy 101 for Dog Lovers: The Secrets to Puppy Training without Force, Fear, and Fuss. With a focus on preventing and dealing with problem behaviors, as well as obedience work and ‘tricks’, Puppy Development Guide covers a vast variety of topics in minute detail – all round, an invaluable manual for dog owners everywhere. You can check out the Puppy Development Guide by clicking on the link below: