How Having Six Dogs Changed Our Life 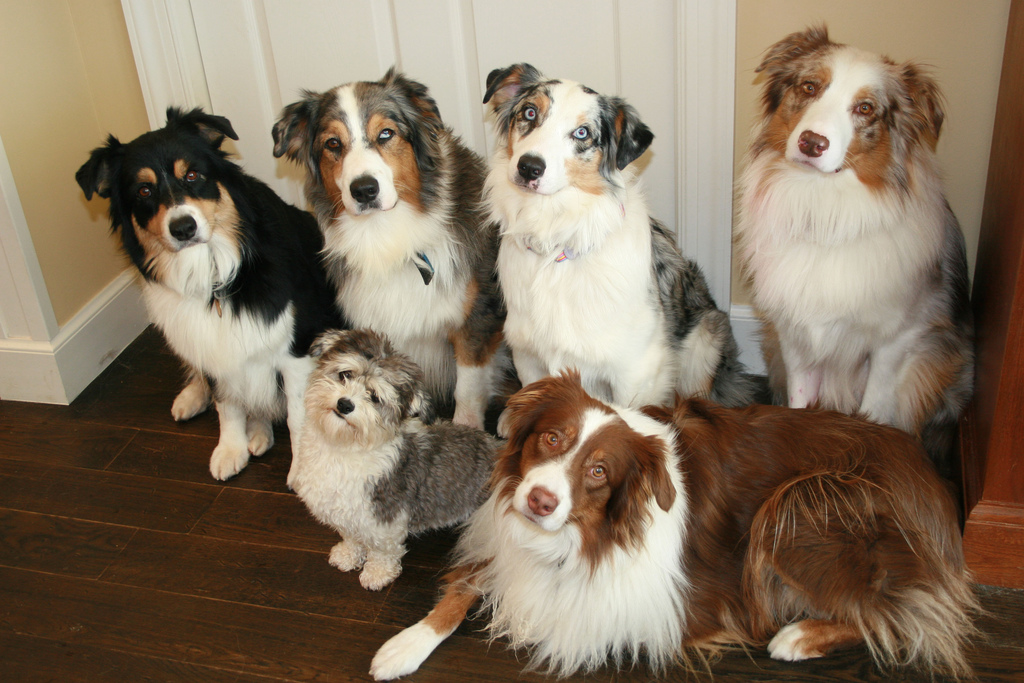 When I tell people that my mother’s house has six dogs in it, the usually look at me as though I’m related to people with nine heads (and I assume that’s hereditary). It seems to be a little less insane when I explain there are three people in the house, and each of them happens to own two each, but only marginally. There are six dogs, six distinct personalities, and a hierarchy that gets less defined as it goes down.

My mother’s dogs, Shawn and Zoe, are two large, Old English Sheepdogs which we keep cut short (as no one has three hours per day per dog to maintain a full coat). Zoe is the eldest, and has also claimed the Alpha dog position; a position she believes entitles her to seniority, attention, and whatever food is left on the kitchen counter. Shawn, on the other hand, is a doofus. Loyal almost to a fault and occasionally displaying some smarts–such as the time he tried to look under a toilet when it was flushing, or his seemingly innate knowledge of the question “Where is

To best understand one of Shawn’s unique habits, it helps to first introduce the roommate’s dogs: Sam and Sadye, the Bichon Frise. Despite their small size, they get along really well with the larger dogs. Sadye is the under-loved geek of the group, who is Sam’s best friend only when no one else is around. Sam is kind of a social butterfly–or he is masking disobedience by refusing to do anything, like go outside, until he’s had every human in the room pat him first. Sam is only five days older than Shawn–a fact that seems a little amusing when they’re standing next to each other: one barely off the ground at 15 pounds, the other an 80 pound brick wall on legs. When they first arrived, they became thick as thieves, and were affectionately called Batman and Robin.

There is a theory floating around that Shawn at one time did, or still does, believe he is around Sam’s size, and that Sam believes the converse is also true. The proof we have is that Unique Habit referenced earlier: while my mother, sister and I are eating at the table, Shawn often tries to squeeze his massive frame underneath one of the chairs–usually only getting his head and shoulders through–for the sole purpose of barking at us. We are not sure why he does this, perhaps he is demanding attention, or perhaps he believes he can’t be seen under there–despite the large, hairy legs and butt sticking out the back as evidence to the contrary. There was one instance where he was already under my chair, shouting up at my mother when Zoe arrived. Suddenly, the barking became muffled. I didn’t realize why until my mother started laughing: Zoe had repaid Shawn for years of sitting on people by settling directly on his head.

My sister’s dogs are often the crowd favorites. Both Shih-tzu Mixes, they are small, cute, and full of personality. Scrappy–a Shih-doodle–is the littlest dog in the house. He is a bit of a curmudgeon when it comes to the other dogs, but if you want to pick him up, he will sort of blob and absorb himself into you. My mother describes him as the best cuddle you’ll ever have, and I’ll agree (as will anyone else who has met him), he is very rewarding. While I won’t admit to any kind of favoritism, the dog who is kind of my favorite I saved for last: Baylee, a Shyorkie (that’s apparently Shih-tzu and Yorkie). who is the last addition to the house, and has enough personality to have made a name for herself. What we learned very quickly about Terriers is that they have no fear–most of the time. At nearly eight pounds, she has successfully claimed the Beta position in the household–partly because Zoe occasionally asserts herself, partly because no one else seems to care. Loud, sudden noises do scare her, but strangers do not; however, if you come into the house and don’t pay enough attention to her when she greets you, she will then sulk and hide under her mother (my sister)’s bed.

Baylee’s lack of fear has also made her an accomplished escapologist. When we go out, the larger dogs are crated to keep them out of trouble, and we would put the smaller dogs in one of the bathrooms with a gate across the door. That is, before Baylee arrived. For a while, we would return and find Baylee had decided she wanted no part of being locked in the bathroom and had escaped. At first we thought she was slipping through a gap in the barrier, so we switched it with another in the house; she still escaped. Then we guessed she was somehow climbing or leaping over the gate, so we stacked both in the doorway, creating a nearly five-foot barrier, leaving about 18 inches at the top of the door; she’d still greet us on our return. One afternoon, a friend was doing some work around the house while the ladies were at work, and he swears he saw Baylee climbing out. We still couldn’t wrap our heads around the physics of it until we saw it for ourselves a few weeks later: She would wedge herself between the door and the jamb, and climb up the barrier, then jump the few feet down into the hallway and trot off victoriously, her small tail wiggling with victory.

Living with six dogs is often chaotic. It’s also rewarding and often funny. The six dogs feel like characters in a sitcom; although the dialog would be a little flat. One thing that’s certain: at the Turner household, you will not go bored, lack entertainment, or leave not covered in slobber or hair.